There will be two lectures separated by a break:

The Bible and Astronomy will take us to many of the Old and New Testament passages that deal with the heavens. Many verses in the Bible that mention various planets and constellations will be examined. Ernst will also touch on the subject of astrology and the “Blood Moon Craze” that is pervading Christianity today.

The Big Bang is an expose’ of the currently popular theory of how the universe came into existence. Points include a discussion of why God created light before creating the sun and stars. We will also discuss some of the major scientific deficiencies of this theory, including dark matter, dark energy, and black holes. 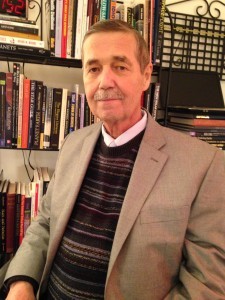 Ernst Klaus was born in 1948 in Salzburg, Austria, our family immigrated to the US in 1952. I attended Catholic parochial school through the 7th grade, and realized that the theology being taught wasn’t from God. In my late teens and early 20′s I became an atheist. A friend at work gave me a Bible when I was 26 years old, and I realized as I read it that it was God’s word. A year later I accepted Christ as my Savior and was Born Again. My wife Cathy was saved the following year.

In 2007 Cathy and I were at a thrift store where I found a college astronomy textbook. I already knew that there would be much in it that wasn’t Biblical, but I determined to read it to see what it taught that wasn’t science. Although I have no training in science, it was easy to see through the many strained theories that had their origin in evolutionist philosophies. I have continued to inform myself on the subject ever since.

During the last several years I have been seeking to develop a ministry as a young earth creationist in the field of astronomy. As a result I have presented messages and Power Points which address various aspects of the creation vs. evolution debate.